*Did God hide secrets in the Bible itself? Did the 1st Christians hide the truth? Is Christianity one big conspiracy? Was Jesus a Buddhist?* 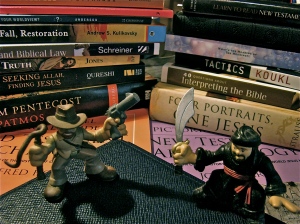 So, are there secrets in the Bible? And did the church cover up secrets about the Bible?

In this series, we’ve refuted these claims:

Further, many of the other articles posted on God From the Machine in the past year have refuted claims made elsewhere, including the claim that Christianity came from paganism.

What has become overwhelmingly clear is:

(1) Many of these claims that attack Christianity and deny the traditional understanding of Christianity are based on unadulterated speculation.

We live in the time of nonstop television programming where literally hundreds of channels are competing for your attention. As a result, even channels that appear to be educational are drenched in sensationalism.

As we have seen with the History Channel’s Bible Secrets Revealed, serious history has been substituted with conspiracy theories, sloppy half-information, and grand conclusions based on shoddy evidence – if any evidence at all.

We also live in the age of the internet, where every nutty conspiracy theory is kept alive by continuous circulation by those who don’t know any better or those who accept as truth anything they come across that reinforces their chosen worldview.

The great thing about hackneyed conspiracy theories is that they survive because of lack of evidence, not because of convincing evidence — which is backwards from how much of the rest of the world functions.

It’s like finding two red puzzle pieces (that may not even belong to the same puzzle) at the bottom of a drawer and jumping to the conclusion that the completed puzzle must be a Lamborghini.

“How do you know it’s a Lamborghini?” someone might ask you. “Did you find the box with the other pieces?”

“No,” you answer, “but I know there are puzzles of Lamborghinis out there.”

“But how do you know those pieces are a Lamborghini? Where’s the box with the other pieces?”

“Someone purposely hid the box, so I can’t prove it.”

“Can you prove someone purposely hid the box?”

“No, they covered that up too!”

Do you see the problem with this sort of thinking?

Hey, maybe you’re even right. Maybe it is a Lamborghini. But don’t expect anyone to take you seriously until you find that box.

As we have seen in this series, little evidence (if any) support the more outrageous claims of the unbelieving scholars on the History Channel, and what evidence there is doesn’t justify the claims they’re making. Much more obvious (and less scandalous – and thus, less TV-worthy) explanations account for the evidence.

For example, I once had a history teacher tell me Christianity comes from paganism. I asked, Where are the primary documents of the supposed myths that are similar to Christianity? What I was asking for was hard evidence. What evidence did she offer? A Youtube video! (And a lame one at that!) I honestly wanted to say to her, “Shame on you! You’re a history teacher! You should know better!”

(To read my article on how claims that Christianity is from paganism are unfounded, click here.)

So, Was Jesus Influenced by Buddhism?

Here is another example of this unbridled speculation. The fact that this was even suggested on Bible Secrets Revealed illustrates just how much of what is offered on these shows are based not on serious academic investigation, but careless conjecture and even dishonest assumptions.

If this is a serious theory, the one making the claim has a mountain-sized burden of proof, because no serious scholar actually believes this because all evidence says otherwise:

Christianity’s founder was a Jew in the Jewish land of Judea. All evidence shows Christianity spread from Jerusalem, initially by Jesus’ Jewish disciples. The first Christians were Jews.

In fact, this is exactly what Jesus and the writers of the New Testament did. They constantly refer back to the Old Testament to put what is happening in the New Testament into context. To chase after unsubstantiated claims that Christianity originated from Roman paganism, Buddhism, or any other worldview other than the ancient Jewish worldview will lead to a dead-end.

But what about Jesus’ “lost years” between his birth and ministry, as was brought up on the History Channel? All evidence points towards him being a carpenter in Judea. Is it possible he traveled to the East and learned about Hinduism or Buddhism? Sure, it’s possible, but is it plausible based on the evidence? If we’re going to accept this theory, why not say Jesus traveled to northern Europe and became a Viking for a few years?

Everyone can speculate. But what does the evidence say? 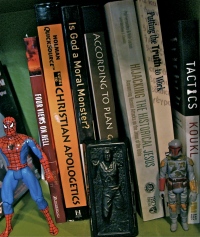 One more thing to consider before moving on:

Homicide detective and former atheist, J. Warner Wallace in his book Cold Case Christianity explains what is needed for a successful conspiracy:

Wallace points out that even conspiracies with most or all of these 5 characteristics rarely remain hidden—and the first Christians had none of these things!

(We won’t be exploring this further here, but I recommend picking up Wallace’s excellent book.)

Simply & clearly lays out the historical argument for the reliability of Christianity from an interesting perspective.

From the beginning, Christianity has been a very public religion. Jesus preached in public and he performed miracles in public. Furthermore, the most important miracles of Christianity —Jesus Christ’s death and resurrection—were public.

Notice, this is very different than other religions that make miraculous claims. Often, only the founder witnessed a miracle or experienced an encounter with God or an angel.

Because of the public nature of Christianity, it should be the easiest faith to disprove, yet it has continued to grow for two thousand years.

Even today, two thousand years later, the historical evidence for Jesus’ resurrection is hard to refute, and when all the evidence is taken together the only plausible explanation is that God did something miraculous.

So we have to ask: If God decided to reveal himself through his Son, Jesus Christ, why would he keep other things concerning salvation secret?

I cannot think of a single reason.

If God went through the “trouble” to reveal himself to us, would he not reveal everything he wants us to know?

As I said, Christianity has always been a public religion, and it still is. There are no secrets to salvation that those outside of the church don’t know about. Outsiders and unbelievers are invited to join Christians in their worship services at all times; anyone can go into a book store and learn what Christians believe by picking up a Bible; no “secret knowledge” is given to those who “join,” and there are no secret rituals.

Those that claim to be Christian churches but do these secret things are cults on the fringe of the faith, and I wouldn’t consider them Christian in any biblical sense.

The History Channel’s Bible Secrets Revealed (and the like) are determined to make it appear that the exclusion of certain ancient writings from the Bible were an attempt to suppress some truth or to hide some secrets. But the truth is much less complicated, much less exciting, and much more starkly obvious: the church was protecting God’s Word from corruption.

(To read more on God From the Machine about the uniqueness of the Christian Scripture and Christianity’s “public-ness” click here.)

But Did God Himself Hide Secrets in the Bible?

So, how should Christians think about divine secrets?

Scripture informs us quite clearly:

“The secret things belong to the Lord our God, but the things that are revealed belong to us and to our children forever, that we may do all the words of this law.”  (Deuteronomy 29:29)

As finite, limited humans, there are things we simply cannot know — unless God has revealed them to us. And there are things God has not revealed. Why? I doubt we’ll ever know within this age or lifetime (but I’m betting primarily for our own good).

Here, we must trust the sufficiency of Scripture. God has revealed to us, through Scripture and Jesus Christ, all we need to know (and all he wants us to know).

“But concerning that day and hour no one knows, not even the angels of heaven, nor the Son, but the Father only” (Matthew 24:36)

But don’t Christians believe Jesus is God the Son? Doesn’t God the Son share the same nature as God the Father? How can Jesus not know the future?

The answer lies in Paul’s letter to the Philippians. When God the Son took on flesh as Jesus of Nazareth, he voluntarily limited himself, depending on God the Father (because, again, Jesus is our perfect model):

“Have this mind among yourselves, which is yours in Christ Jesus, who, though he was in the form of God, did not count equality with God a thing to be grasped, but emptied himself, by taking the form of a servant, being born in the likeness of men. And being found in human form, he humbled himself by becoming obedient to the point of death, even death on a cross.” (Philippians 2:5-8)

Thus, in his incarnate state as Jesus of Nazareth, God the Son accepted that any supernatural knowledge was dependent on whether God the Father gave it to him. This is a concept many Christians overlook or misunderstand, but the point that concerns us here is this: Christians need to humbly accept that there are things God simply has not revealed to us.

(In addition, the next time some misguided pastor or radio host announces that he has studied the Bible and figured out the date of the Day of Judgment, be sure to point out that not even Jesus knew.)

Does that mean we shouldn’t pour over the Scriptures, studying them intensely to understand all that God has revealed? Of course not! But it also means we shouldn’t be inventing “secrets” that simply are not there.