SERIES INTRO: Often skeptics point to differences in the four Gospels of Jesus Christ and claim they’re contradictions. This series will cover some general principles that you can use when you do come across a Gospel difference. By using these principles, many of these perceived differences can be easily explained. On the other hand, this series is not simply to defend the Gospels, but to positively show that having four Gospels brings our understanding of the life and work of Jesus Christ deeper than any one piece of writing can do.

Positive Evidence: Going on the Offensive

When I started this series, I didn’t want it to be just a defense of the Gospels, but also to show positively why having more than one Gospel is a blessing. Where there is certainly angst that happens when we study the Gospels closely and perceive differences, there is also joy found when he examine them closely; pondering these challenges expose us to unique perspectives of Jesus we wouldn’t otherwise perceive — similarly to how four painted portraits of the same person by different artists give us deeper understandings of that person.

My hope is that by wrestling with these challenging passages, you’ve been exposed to unique joys regarding Jesus from the different perspectives of the Spirit-inspired Gospel writers.

But, despite all I’ve said above, admittedly, yes, much of this series is a defense, so I want to offer some final observations that will not just help you defend your faith, but also go on the offensive.

We will conclude this series with 3 brief observations:

The 2006 Academy Award-winning German movie The Lives of Others takes place in 1984 in East Berlin under the oppressive rule of Communism. In one scene, an instructor for the Secret Police plays for a trainee a recording of a prisoner being gruelingly interrogated. After listening to the prisoner repeat the same alibi over and over again, the instructor fast-forwards the recording to several hours later. They listen to the exhausted prisoner’s alibi one last time. Then, the instructor and trainee have the following conversation:

Instructor: “Did you notice anything about his statement?”

Trainee: “It’s the same as in the beginning.”

Instructor: “Exactly the same. Word for word. People who tell the truth can re-formulate things, and they do. A liar has prepared sentences, which he falls back on when under pressure. [Prisoner number] 227 is lying.”

Interrogators — whether they are police detectives, CIA, or KGB — know that when someone repeats a truthful story again and again, they’re able to improvise variations in the story by adding or removing details.

Do the Gospel differences we’ve looked at throughout this series show the truth from differing perspectives or do they show a carefully crafted lie?

Ironically, despite all of the time in this series spent defending Gospel differences due to accusations of fictionalization, we’d have more grounds for being skeptical of the Gospels if all four accounts were exactly the same!

If the Gospels were word-for-word identical, we’d have good reason for believing they were collaborated and simply copied from each other. Instead, the evidence suggests that we have four independently investigated accounts of the ministry, crucifixion, and resurrection of Jesus of Nazareth.

Former homicide detective and atheist, J. Warner Wallace in his book Cold Case Christianity says we “should expect variations among true eyewitness accounts. These expected variations are not a problem for those of us who are working as detectives, so long as we can understand the perspectives, interests, and locations from with each witness observed the event. It’s our duty, as responsible investigators, to understand how eyewitness statements can be harmonized so we can get the most robust view of the event possible.”[1]

(2) Differences? What about the similarities??

Further, by focusing on the few differences in the Gospels, we often ignore the wealth of harmony. Little is needed to be said about this point; the Gospels plainly have vastly more in common than they don’t. Jonathan Pennington writes, the Gospels are “amazingly consistent in terms of Jesus’ character, tone, teaching, emphases, and the general course of his life and death.”[2]

In a number of interviews on radio shows and podcasts, Dr. Timothy McGrew has been spreading the word about a forgotten apologetic called Undesigned Coincidences in the Gospels (based on the 1851 book of the same name by J.J. Blunt), and he has written a series of articles for the Christian Apologetics Alliance.

As we have discussed, when two or more authors write about a historic event there will be similarities and differences. Where the major events will be the same, minor details may be included or left out.

Looking at an example will help clarify:

In Mark 14:55-59, Jesus is accused in front of the Sanhedrin of saying he will destroy the Temple and rebuild it in three days.

Also, in Mark 15:27-30, as Jesus is on the cross, people mock him and accuse him of saying a similar statement about destroying the Temple and rebuilding it in three days. This is also reported in Matthew 27:38-40.

But where in Mark or Matthew does Jesus say this? Nowhere — A read through both Mark and Matthew provides no evidence that Jesus ever said such a thing. Yet, when we read the Gospel of John, we find that Jesus did make this statement!

So the Jews said to him, “What sign do you show us for doing these things?” Jesus answered them, “Destroy this temple, and in three days I will raise it up.” The Jews then said, “It has taken forty-six years to build this temple, and will you raise it up in three days?” But he was speaking about the temple of his body. When therefore he was raised from the dead, his disciples remembered that he had said this, and they believed the Scripture and the word that Jesus had spoken.

It’s highly unlikely that such complimentary details would be deliberately falsified, and the assurance that they’re based on authentic events is extremely high.

The Joy of Four Gospels!

In conclusion, what do we gain by having four Gospels?

What can we add to this list? Please share/comment below.

Overall, I hope this series has helped you gain a better understanding of the Holy Scripture, the Christian faith, and Jesus Christ, our Lord and Savior.

Fittingly, we will end this series with the closing words of John’s Gospel:

Now there are also many other things that Jesus did. Were every one of them to be written, I suppose that the world itself could not contain the books that would be written. (John 21:25)

*All books below are highly recommended*

“Then Jesus, calling out with a loud voice, said, ‘Father, into your hands I commit my spirit!’ And having said this he breathed his last.” (Luke 23:46)

God the Son has existed for eternity in perfect fellowship with God the Father. When God the Son became Jesus, though he was both God and man, he voluntarily gave up his rights as God and submitted wholly to the will of the Father.

Philippians 2:6-8 tells us Jesus “did not count equality with God a thing to be grasped, but emptied himself, by taking the form of a servant… he humbled himself by becoming obedient to the point of death, even death on a cross.”

When Jesus took on himself the sins of the world and willingly endured the utter terror of crucifixion, he demonstrated perfect faith in God the Father.

As a former self-professed atheist, I can tell you, skeptics don’t like the word faith. They portray faith as “blind faith” — as belief without evidence. But a more accurate understanding of Christian faith is found in the word “trust.” As your time with Christ grows, so will your trust of him. As you pray, grow more familiar with His Scripture and live according to it, and partake in His church, your trust will strengthen. Nonbelievers can’t understand Christian faith because they have never walked with Christ.

When the Holy Spirit woke me out of the murkiness of atheism years ago, I did take a leap of faith. Now, after nine years of walking with Christ, when I don’t know what the future holds, I can say with confidence, “Father, into your hands I commit my spirit!”

Faith is not belief without evidence, but belief because of prior evidence. 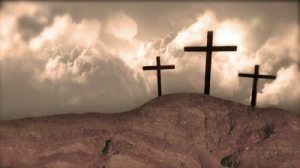