*Is Jesus a harmless wimp? Is he your best friend? Or is he more dangerous than we imagine?*

It’s easy to see why some people think of Jesus of Nazareth as some harmless hippy. Usually he’s portrayed in paintings with long, flowing hair and sandals. We know Jesus taught a message of peace and love. He even loves children,[1] and he admits he’s “gentle and lowly in heart.”[2]

Because of this, it’s also easy to see Jesus as a wimp. I mean – come on – how tough can that toga-wearing guy cuddling a lamb in the painting be? How many tough hippies do you know? If fact, how tough can someone look while his emaciated body hangs on a crucifix? For God-in-the-flesh, Jesus doesn’t come across all that powerful.

Is this understanding of Jesus accurate?

But Jesus is not your beatnik cousin or your hipster roommate. He’s one of the persons of the Triune God of Scripture, which means Jesus is God. In Exodus 15:3, Moses and the Israelites praise God for destroying the Egyptian army, and they call God “a warrior.”

Here are 3 more reasons why Jesus is a warrior:

A lot of people hate confrontations and do everything they can to avoid them, but Jesus confronted his hostile adversaries not by passive-aggressively talking about them to others or by writing scathing things about them or even by cyber-bullying them over social media, but he confronted them face-to-face. Not only that, he silenced them. These are not the actions of a coward or weakling.

The chief priests, scribes, Pharisees, and Sadducee were out to get Jesus, but Jesus never avoided a debate with them. Jesus never shied away from speaking the hard truth to them about their hypocrisy and empty religion.

In Matthew 10:16, Jesus warns his disciples,

“Behold, I am sending you out as sheep in the midst of wolves, so be wise as serpents and innocent as doves.” 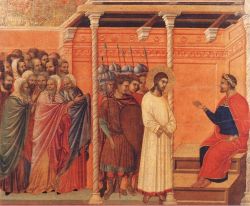 Not only is Jesus not afraid of demons, but the demons tremble at the sound of his name! James 2:19 tells us:

You believe that God is one; you do well. Even the demons believe – and shudder!

It’s convicting to us today to think demons actually understand God with a better sense of fear and reverence than we do. They have good reason. Scripture shows us that casting out demons was a regular part of Jesus’ ministry:

Whenever the unclean spirits saw Him, they would fall down before Him and shout, “You are the Son of God!” (Mark 3:11)

Just then there was a man in their synagogue with an unclean spirit; and he cried out, saying, “What business do we have with each other, Jesus of Nazareth? Have You come to destroy us? I know who You are – the Holy One of God!” And Jesus rebuked him, saying, “Be quiet, and come out of him!” Throwing him into convulsions, the unclean spirit cried out with a loud voice and came out of him. They were all amazed, so that they debated among themselves, saying, “What is this? A new teaching with authority! He commands even the unclean spirits, and they obey Him.” (Mark 1:23-27)

They came to the other side of the sea, to the country of the Gerasenes. And when Jesus had stepped out of the boat, immediately there met him out of the tombs a man with an unclean spirit. He lived among the tombs. And no one could bind him anymore, not even with a chain, for he had often been bound with shackles and chains, but he wrenched the chains apart, and he broke the shackles in pieces. No one had the strength to subdue him. Night and day among the tombs and on the mountains he was always crying out and cutting himself with stones. And when he saw Jesus from afar, he ran and fell down before him. And crying out with a loud voice, he said, “What have you to do with me, Jesus, Son of the Most High God? I adjure you by God, do not torment me.” (Mark 5:1-7)

The demon-possessed man tells Jesus his name is “Legion, for we are many”[14] presumably because a whole legion of demons are within him. Yet even they fear Jesus, and even this poor, tormented man is freed at Jesus’ command.

Jesus’ disciples were also able to cast out demons in his name (by his authority).[15] As Paul writes to other followers of Jesus in Romans 16:20,

The God of peace will soon crush Satan under your feet. 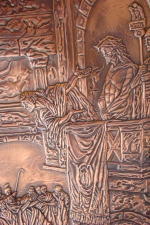 The person who told his followers to turn the other cheek won’t be turning his cheek forever.

What many don’t realize about one of the most quoted passages of Scripture, “For God so loved the world, that he gave his only Son, that whoever believes in him should not perish but have eternal life,”[25] is that this open invitation for salvation will not be available forever.

For God did not send his Son into the world to condemn the world, but in order that the world might be saved through him. Whoever believes in him is not condemned, but whoever does not believe is condemned already, because he has not believed in the name of the only Son of God. (John 3:17-18)

Notice the words “condemned already.” In other words, Jesus isn’t the reason people go to Hell to eternal separation from God; he’s the reason people stay out of Hell. Many people get this backwards when they hear Christians say that Jesus is the only way to salvation. They think what’s being said is, Since you’re not Christian, Jesus is condemning you to Hell. Yet what Scripture teaches is, You’re already going to Hell, but Jesus is the solution. We all have sin and are separated from God by it. God the Son could have chosen to (A) leave it this way or (B) become a man, absorb the punishment we deserve, and snatch us from Hell’s grip by the free gift of salvation. Like all gifts, a person can only benefit from it if he receives the gift. Jesus isn’t the cause; he’s the cure.

But something else many don’t understand about John 3 is that this gift of salvation is not an open offer forever. During Jesus’ First Coming, he didn’t come to condemn but to bring the free gift of salvation. In Jesus’ Second Coming, he’ll come as judge of the living and the dead,[26] bringing judgment and condemnation to all those who haven’t repented and believed in what he accomplished on the cross.

The apostle Paul speaks of Jesus judging the secrets of our hearts,[27] and he writes,

It is the Lord who judges me. Therefore do not pronounce judgment before the time, before the Lord comes, who will bring to light the things now hidden in darkness and will disclose the purposes of the heart. Then each one will receive his commendation from God. (1 Corinthians 4:4-5)

The Book of Revelation gives us both a glorious and horrifying vision of Jesus Christ’s return. For those who are of Jesus’ flock, they don’t have to fear condemnation because Jesus has stood in their place and taken their punishment, but those who aren’t of Jesus’ flock will be judged fairly, justly, and perfectly by the perfect, all-knowing Son of God, and apart from the saving power of Jesus’ sacrifice, they’ll all fall short.

As we speak about Jesus’ not being a wimp, there’s no better place to end than in the Book of Revelation, the last book of the Bible. During Jesus’ Second Coming, he will declare war on all evil and destroy all his enemies, including Satan and death.[28] Those who rise up against him, in one last futile attempt at autonomy and rebellion, will meet a grisly defeat.

The Book of Revelation is highly symbolic, so it’s often difficult to know what to understand literally or symbolically. But whether it’s to be understood literally or figuratively, the image painted in Revelation 19 of the warrior Jesus returned to reclaim his creation is not for the faint of heart:

Then I saw heaven opened, and behold, a white horse! The one sitting on it is called Faithful and True, and in righteousness he judges and makes war. His eyes are like a flame of fire, and on his head are many diadems, and he has a name written that no one knows but himself. He is clothed in a robe dipped in blood, and the name by which he is called is The Word of God. And the armies of heaven, arrayed in fine linen, white and pure, were following him on white horses. From his mouth comes a sharp sword with which to strike down the nations, and he will rule them with a rod of iron. He will tread the winepress of the fury of the wrath of God the Almighty. On his robe and on his thigh he has a name written, King of kings and Lord of lords.

Then I saw an angel standing in the sun, and with a loud voice he called to all the birds that fly directly overhead, “Come, gather for the great supper of God, to eat the flesh of kings, the flesh of captains, the flesh of mighty men, the flesh of horses and their riders, and the flesh of all men, both free and slave, both small and great.” And I saw the beast and the kings of the earth with their armies gathered to make war against him who was sitting on the horse and against his army. And the beast was captured, and with it the false prophet who in its presence had done the signs by which he deceived those who had received the mark of the beast and those who worshiped its image. These two were thrown alive into the lake of fire that burns with sulfur. And the rest were slain by the sword that came from the mouth of him who was sitting on the horse, and all the birds were gorged with their flesh. (Revelation 19:11-21) 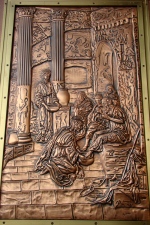 Jesus is not your hippy roommate or your homie or that pencil-necked nerd everyone used to push around. But Jesus also told his disciples this:

“This is my commandment, that you love one another as I have loved you. Greater love has no one than this, that someone lay down his life for his friends. You are my friends if you do what I command you. No longer do I call you servants, for the servant does not know what his master is doing; but I have called you friends, for all that I have heard from my Father I have made known to you. (John 15:12-15)

What a beautiful sentiment by the creator of the universe! And it’s one that should deeply humble us – always remembering that God also said, “my glory I give to no other.”[30] 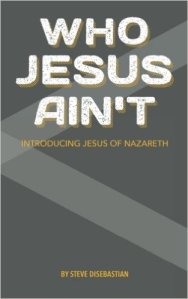