In many ways, Western Christians are living in a culture that is increasingly like the first culture that the first Christians lived in: a pagan culture. Christianity was born and spread within the Roman Empire, a place of many gods and many ways of worshiping, where most* religions were seen as equally valid. Today, we call this pluralism.

(*I say “most” because Christianity went through periods of persecution by the Roman government for its first 300 years until it was officially legalized by Emperor Constantine. Christians – like the Jews – wouldn’t worship any Roman gods or the emperor, who was considered a god. Christians were even called “atheists” by Romans because they believed in only one God, and an invisible one at that. Appropriately, Christians’ convictions have made them unpopular again in many parts of the West today.)

As our culture becomes more post-modern—as well as post-Christian—in mindset, religious pluralism has grown into the popular spirituality of our day. Both established, traditional religions and unambiguous atheism are being rejected by many and an undefined spirituality—a fuzzy spiritual agnosticism—has been embraced, which lives by the axiom, “I’m spiritual, not religious.” For all practical purposes, these pluralists live as atheists within secular society but still embrace some self-defined form of spirituality, which has little – if any – impact on their lives. Basically, it’s OK to believe spiritual things as long as you don’t take them too seriously.

Sadly, this pluralistic mindset has even made its way into Christian circles, and not just in liberal mainline denominations but also in Bible-believing, evangelical churches.

As our world grows “smaller,” more people today have been introduced to worldviews and religions foreign to their own by neighbors, coworkers, and friends (and the Internet and modern media) than perhaps at any other time in history. This is a positive thing in many ways, but those raised to believe that salvation comes only through Christ Jesus may begin to question whether their neighbors —perhaps loving parents and spouses and contributors to the community — will be eternally separated from God because they’re not followers of Christ. Christians have always understood the Bible to teach that the only way to have salvation from sin is through belief in the work and person of Jesus Christ. This is often called exclusivism.

Furthermore, biblical illiteracy has led to unfamiliarity with what the Bible teaches. Not only has Western culture grown more secular and fewer people grow up in churches, but even those in Christian families and churches spend little time closely reading and studying Scripture.

Alternatives to exclusivism include pluralism and inclusivism. Where pluralism validates that all (or most) religions lead to God, inclusivism is more nuanced. Inclusivism believes that Jesus Christ is the only savior, but one does not have to believe in him to be saved. In short, Jesus Christ was absolutely essential in saving humanity from damnation, but one doesn’t have to believe in Christ specifically to benefit from that salvation. In inclusivism, one may be saved through another religion or through general revelation even if they never heard of the gospel of Jesus Christ.

For salvation, one needs special revelation. Special revelation includes all the unique, supernatural works of God throughout history, which are recorded in the Bible, including God the Son becoming human as Jesus of Nazareth (and his death and resurrection), the work of the Holy Spirit, and even the Bible itself – as the Bible is the written, “God-breathed” (2 Tim. 3:16) revelation of God.

The Bible confirms all humans know of God through general revelation, yet do not seek him out. Instead they invent their own religions and worship their own idols. These may be literal idols or the “idols” of secular society (such as money, sex, self-centered independence). In essence, all know there’s a true God, yet they want to remain god of their own lives, so they exchange the truth for a lie.

“For the wrath of God is revealed from heaven against all ungodliness and unrighteousness of men, who by their unrighteousness suppress the truth. For what can be known about God is plain to them, because God has shown it to them. For his invisible attributes, namely, his eternal power and divine nature,have been clearly perceived, ever since the creation of the world, in the things that have been made. So they are without excuse. For although they knew God, they did not honor him as God or give thanks to him, but they became futile in their thinking, and their foolish hearts were darkened. Claiming to be wise, they became fools, and exchanged the glory of the immortal God for images resembling mortal man and birds and animals and creeping things.” (Romans 1:18-23)

In the book Faith Comes By Hearing, Christopher Morgan explains that there is a spectrum of diversity within this new paganism [1]. For example, some versions of universalism teaches that the whole world (even Satan! [2]) will ultimately be saved through Christ.

Pluralism – All (or many) religions lead to God and salvation.

Exclusivism – The traditional Christian view that salvation can come only through Jesus Christ’s free gift of salvation; thus, biblical Christianity is the only true path to God.

Inclusivism – Jesus Christ’s life and work achieved salvation, but one does not have to know of or believe in Christ to be saved. One can be saved by faithfully following another religion or general revelation.

Universalism – One way or another, everyone (or almost everyone) will ultimately be saved through the work of Jesus Christ.

General Revelation – One can know certain things about God through nature and/or their innate senses.

Special Revelation – The unique supernatural works of God throughout history, including miracles, Christ himself, and the Bible.

The Incomprehensibility of Pluralism Within a Biblical Worldview

Abandoning the Bible is the only option open to the pluralist as Scripture is so clearly exclusivistic. Verses like John 14:6, Acts 4:10–12, and 1 John 5:11–12 (see below) so clearly teach that salvation comes through Christ alone that pluralists and universalists must have a low view of Scripture in order to continue to hold their views, as does John Hick, who represents the pluralist view in the book Four Views on Salvation in a Pluralistic World.[3]

The pluralist must deny that the Bible is the preserved Word of God since Jesus’ first followers were certainly exclusivists:

“…let it be known to all of you and to all the people of Israel that by the name of Jesus Christ of Nazareth, whom you crucified, whom God raised from the dead—by him this [formerly crippled] man is standing before you well. This Jesus is the stone that was rejected by you, the builders, which has become the cornerstone. And there is salvation in no one else, for there is no other name under heaven given among men by which we must be saved.” (Acts 4:10-12)

“And this is the testimony, that God gave us eternal life, and this life is in his Son. Whoever has the Son has life; whoever does not have the Son of God does not have life.” (1 John 5:11-12)

And Jesus himself was absolutely clear that he was not a pluralist or universalist:

Even if we didn’t have these extremely clear verses from the New Testament, the exclusivist nature of the Bible is seen throughout the Old and New Testaments. There are constant warnings against following false religions and gods and regular statements about salvation coming only through the one true God. Plainly contrary to the universalist idea that all (even Satan) will eventually be saved through Christ, Revelation 19 and 20 clearly shows the horrible fate of those hostile to God, including Satan.

Further, some other obvious issues are raised concerning pluralism:

The pluralist may try to get around this by saying that all (or many) religions have some truth within them. This isn’t a problem for the Christian; a Christian can confirm that there is some truth in other religions, yet none but biblical Christianity are wholly true or lead to salvation.

Also, pluralists still have a problem: How do they know what is religious truth or error? By what standard do they judge?

2. Only Jesus Could Win Us Salvation

The Bible teaches that God is perfectly good and holy, all people have sinned, and all people are alienated from God by that sin. Only Jesus, who is uniquely fully human and fully God, could repair this chasm-sized rift between God and man. No amount of “good works” or rituals can bridge that chasm. Only Jesus could live a sinless life, and only Jesus could die an unjust death. Only someone fully human could represent humankind, and only someone fully God could cover the sins of all humankind. Christians are exclusivists because only Jesus – the only person to ever be complete man and completely God – could achieve for us salvation, plain and simple.

3. Jesus Died For Nothing

Jesus died a horribly brutal death on a Roman cross for the sake of all those who would believe in him to be saved from their sins. Jesus did this willingly, yet also prayed in the Garden of Gethsemane before his arrest and crucifixion, “Abba, Father, all things are possible for you. Remove this cup from me. Yet not what I will, but what you will” (Mark 14:36). God the Son went willingly to the cross, but he also was well aware of the high price he would pay to complete the task he became flesh to accomplish. In Gethsemane, he essentially asks God the Father if there’s any other way to accomplish this, then spare him from the cross. But there was no other way, so he goes willingly.

Here’s the thing: If salvation could be won by any other way, then Jesus didn’t have to die. If there were any other way – even one – for God to accomplish salvation from sin, Jesus died for nothing. In other words, if there were a Plan B for saving the world from sin other than Jesus dying on the cross, Jesus wouldn’t have died on the cross. He would’ve said, “See Plan B.” And if Jesus’ death on the cross were Plan B, he would’ve said, “Plan A works just fine.”

We also have this issue: if there were any other way for God the Father to reconnect with his created people and overlook their sins and God the Father still put Jesus to death on the cross, then Jesus’ death was needless brutality. In other words, if God the Father knew forgiveness of sins could be achieved through humans simply following some rules or completing some rituals or being “nice” or doing X, Y, and Z, why would God the Son need to become a man and die? If pluralism and universalism are true, then God the Father and God the Son both made extremely illogical decisions to allow an act of absolute brutality for absolutely no reason whatsoever.

Dismissing the validity of pluralism and universalism is easy from a biblical standpoint, so what about the more nuanced view: inclusivism?

NEXT: Is knowledge of Christ required for salvation? The Nuanced View: Inclusivism.

Check out Who Jesus Ain’t and other books by GFTM here. 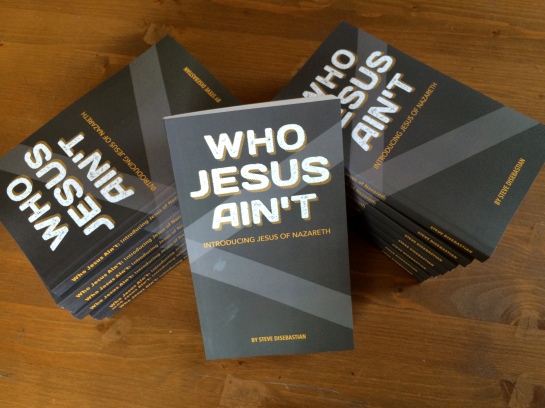