In these articles, we’ll be letting Margaret speak for herself by looking at two written works by the founder of Planned Parenthood: Women and the New Race (1920) and The Pivot of Civilization (1922).

Though often ignored, it’s no matter of debate that Sanger was a believer and promoter of eugenics, and she lays out her thoughts on the subject in the two works mentioned above. Eugenics is an attempt to move the human race “forward” to a new level through biological and evolutionary means. Sanger’s version of eugenics was to control the reproduction of the “unfit” through birth control.

Where the main ideas of both books are simple enough — birth control is the key to ending the ills of society — we saw clearly by her own words in an earlier article, Sanger wasn’t motivated by only alleviating poverty or promoting women’s rights, but also by who should or shouldn’t be “breeding” according to her eugenic philosophy, as we see plainly in the following quote:

“Birth control itself, often denounced as a violation of natural law, is nothing more or less than the facilitation of the process of weeding out the unfit, of preventing the birth of defectives or of those who will become defectives.” (WNR P.151)

In fact, after reading her two books, one can argue Sanger’s eugenic philosophy is the driving force of her life’s work, as it is a major theme weaved throughout all the ideas of both books.

READ: Margaret Sanger, Founder of Planned Parenthood, In Her Own Words:

(1) Eugenics, Elimination of the Unfit

WHO ARE THE “FEEBLE-MINDED”?

Sanger uses the phrase “feeble-minded” regularly in her books, placing the feeble-minded in with those she calls the “unfit” to pass on their genes. She is plainly speaking of people with cognitive disabilities and impaired mental capacity, such as those with Down Syndrome. She states,

“Mental defect and feeble-mindedness are conceived essentially as retardation, arrest of development, differing in degree so that the victim is either an idiot, an imbecile, feeble-minded or a moron, according to the relative period at which mental development ceases.” (PC Loc 1880)

Yet, the reader is left unsure if she would consider anyone with a low IQ as being part of the feeble-mined unfit, as it seems she may.

Sanger’s ideas lead to an obvious moral dilemma: Who decides who is smart enough to reproduce? Where is the line drawn to say, “Anyone under this level of intelligence is unfit to breed”?

ONCE AGAIN, IT’S ALL ABOUT EUGENICS

Chapter IV of The Pivot of Civilization is actually titled “The Fertility of the Feeble-Minded,” where she speaks of “the menace of feeble-mindedness to the race” (PC Loc 778). (To be clear, when Sanger speaks of “race” she is usually speaking of the human race.)

She starts the chapter this way:

“There is but one practical and feasible program in handling the great problem of the feeble-minded. That is, as the best authorities are agreed, to prevent the birth of those who would transmit imbecility to their descendants.” (PC Loc 705)

After stating that the fertility of the feeble-mined are “abnormally high,” she states, “Modern conditions of civilization, as we are continually being reminded, furnish the most favorable breeding- ground for the mental defective, the moron, the imbecile” (PC Loc 707).

To support this idea, she goes on to quote someone named Davenport who refers to the feeble-minded as “members of a weak strain,” which modern governmental systems not only allow, but assist in reproducing. The quote ends as follows: “… so the stupid work goes on of preserving and increasing our socially unfit strains” (PC Loc 711).

Sanger is not just an advocate of government-enforced control denying the “feeble-minded” and others she deems “unfit” from reproducing, but also of denying the “unfit” a political voice.

She quotes Dr. Walter E. Fernald to support her view: “…We now have state commissions for controlling the gipsy-moth and the boll weevil, the foot-and-mouth disease, and for protecting the shell-fish and wild game, but we have no commission which even attempts to modify or to control the vast moral and economic forces represented by the feeble-minded persons at large in the community.” (PC Loc 728)

“Equality of political power has thus been bestowed upon the lowest elements of our population. We must not be surprised, therefore, at the spectacle of political scandal and graft, of the notorious and universally ridiculed low level of intelligence and flagrant stupidity exhibited by our legislative bodies.” (PC Loc 1452)

As you’ll see in the last two quotes below, denial of a political voice in a democratic system isn’t the worst idea Sanger supports when it comes to the “unfit.” 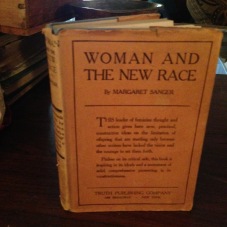 IN HER OWN WORDS

With that, I’ll allow Sanger to continue to speak for herself…

“Only 34,137 of these unfortunates [feebleminded and other defectives] were under institutional care in the United States in 1916, the rest being free to propagate their kind – piling up public burdens for future generations. The feebleminded are notoriously prolific in reproduction. The close relationship between poverty and ignorance and the production of feebleminded is shown by Anne Moore, Ph.D., in a report to the Public Education Association of New York in 1911. She found that children in New York schools came from large families living in overcrowded slum conditions, and that only a small percentage were born of native parents.” (WNR P.31)

“Modern studies indicate that insanity, epilepsy, criminality, prostitution, pauperism, and mental defect, are all organically bound up together and that the least intelligent and the thoroughly degenerate classes in every community are the most prolific… there is truly, as some of the scientific eugenists have pointed out, a feeble-minded peril to future generations— unless the feeble-minded are prevented from reproducing their kind.” (PC Loc 719)

Sanger’s attention turns to the idea of the “so-called ‘good'” or harmless feeble-minded (PC Loc 778). Her response to this idea follows: “In such a reckless and thoughtless differentiation between the “bad” and the “good” feeble-minded, we find new evidence of the conventional middle-class bias that also finds expression among some of the eugenists. We do not object to feeble-mindedness simply because it leads to immorality and criminality; nor can we approve of it when it expresses itself in docility, submissiveness and obedience. We object because both are burdens and dangers to the intelligence of the community. As a matter of fact, there is sufficient evidence to lead us to believe that the so-called “borderline cases” are a greater menace than the out-and-out “defective delinquents” who can be supervised, controlled and prevented from procreating their kind.” (PC Loc 782).

“The presence in the public schools of the mentally defective children of men and women who should never have been parents is a problem that is becoming more and more difficult, and is one of the chief reasons for lower educational standards.” (PC Loc 791)

“The emergency problem of segregation and sterilization must be faced immediately. Every feeble-minded girl or woman of the hereditary type, especially of the moron class, should be segregated during the reproductive period. Otherwise, she is almost certain to bear imbecile children, who in turn are just as certain to breed other defectives.” (PC Loc 863)

“… we prefer the policy of immediate sterilization, of making sure that parenthood is absolutely prohibited to the feeble-minded.” (PC Loc 867)

Yes, you read those last two quotes correctly; Sanger favored forced segregation and sterilization of “[e]very feeble-minded girl” and every women who might pass on “feeble-mindedness” to their children. It’s interesting to note she proposes this for those “especially of the moron class;” one wonders what class of people this is referring to. If one reads her books, it’s not too hard to figure out.

For further insight and more quotes from Sanger herself, see our other articles: Margaret Sanger, Founder of Planned Parenthood, In Her Own Words:

(1) Eugenics, Elimination of the Unfit

Want to partner with me as I defend the faith and give a reason for the hope of Christ to college students at Rutgers University? Learn more by clicking here.

3 thoughts on “Margaret Sanger, Founder of Planned Parenthood, In Her Own Words: Eliminating the “Feeble-Minded””