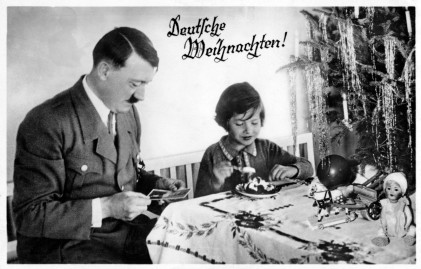 If there were ever a historical person who would surely be a Grinch at Christmas time, I’m sure many people would put forth that that person would be Hitler.

Dr. Gerry Bowler’s book Christmas in the Crosshairs: Two Thousand Years of Denouncing and Defending the World’s Most Celebrated Holiday is an interesting romp through history showing (among other things) how the world’s most celebrated celebration simply can’t be ignored — not by anyone — not by communists, nor fascists, nor even the National Socialist German Workers’ Party — better know as the Nazis.

In one of the most fascinating sections of the book, Dr. Bowler documents how the unstoppable force that is Christmas was addressed by the totalitarian regimes of the 20th Century. The most interesting and, dare I say, outlandish attempt to stop Christmas was by none other than Hitler.

THE NAZI REBRANDING OF CHRISTMAS

Hitler understood that Christmas tradition was “deeply embedded in the German consciousness” and in “what it meant to be truly German.” Therefore, it wouldn’t work to simply ban it.

Even before the 1933 elections that brought Hitler into power, the Nazis used Christmas to advance their anti-Semitic agenda by urging consumers to boycott Jewish businesses. This included picketing and vandalizing Jewish-owned businesses.

After 1933, Goebbels and his Ministry of National Enlightenment and Propaganda went to work rebranding Christmas. Not only did they use Christmas to promote their hateful nationalism, but they would eventually try to wipe the “Christ” out of Christmas. After all, what could the most notorious anti-Semitic regime in history have to do with a season celebrating the most influential Jew of all time?

In the same year, a film was released depicting the Nativity with Mary, Joseph, and the newborn Prince of Peace not only beneath a portrait of Hitler, but surrounded by Nazi stormtroopers and medieval German knights.

Also in 1933, the German Christian Movement took control of the national Protestant Church and aligned it with the Nazis. Jesus — a Jewish Middle Eastern man — was recast as an Aryan victim of the Jews! Alters were decorated with swastikas, and pagan ceremonies were introduced. Nativity plays were banned. Pastors like Martin Niemoller and Dietrich Bonhoeffer resisted, resulting in imprisonment for one and martyrdom for the other.

“Hosanna” and “Hallelujah” were removed from songs for being too Hebrew. The Norse god Baldur replaced Jesus in songs. Children were taught a new version of the classic German Christmas carol “Stille Nacht” (Silent Night):

“Silent night, Holy night, All is calm, all is bright. Adolf Hitler is Germany’s star, Showing us greatness and glory afar, Bringing us Germans the might.”

A Christmas narrative song called Heliand, which begins with John 1:1 (“In the beginning was the Word, and the Word was with God, and the Word was God“), changed into a song about “German myth, dragons, adultery, blood feuds, and racism.” To top it all off, Jesus was presented as the ancient Germanic god Wotan (also know as one-eyed Odin of Norse mythology). Perhaps against his own instincts for self-preservation, the president of the Reich Musical Chamber actually protested in 1937 against an attempt to change the biblical lyrics to Handel’s masterpiece Messiah.

In the years following, Christmas became more nationalized, secularized, and paganized in Germany. Hitler issued instructions on how to celebrate Christmas correctly. Eventually, teams of trained women would be flown into conquered lands to instruct the locals.

HITLER, NO FRIEND TO JEW OR CHRISTIAN

Today, it’s not uncommon to hear anti-Christians claim that Hitler, one of the most notoriously evil men in history, was a Christian. With just a little historical research, one can discover that Hitler Youth sang,

“No evil priest can prevent us from feeling that we are the children of Hitler. We follow not Christ, but Horst Wessel!”

(Horst Wessel was a leader of the Nazi stormtroopers.)

And banners in Berlin read,

“Down with a Christ who allows himself to be crucified! The German God cannot be a suffering God! He is a God of power and strength!”

This doesn’t sound like the slogans of a Christ-friendly regime.

Some of the Nazi inner circle, including Heinrich Himmler and other SS leaders, were true pagans, worshippers of the ancient Germanic gods. One SS leader said, “We live in the age of the final confrontation with Christianity.” Christmas was rebranded as the winter solstice, the Julfest (Yuletide) season. A spinning sun, a symbol of the solstice, replaced traditional Christmas symbols.

December 6th has been celebrated for centuries as the day of Saint Nicholas (the precursor of our modern Santa Claus), but in Nazi Germany it became Wotan’s Day. The Nazis rewrote history, claiming December 6th had belonged to Wotan, “The Rider on the Grey Horse,” all along, but then Christianity showed up and replaced him with St. Nick.

Despite some current arguments that our modern Santa Claus was based on Wotan/Odin, the fact remains that Saint Nicolas was established as a magically flying, miracle-working saint long before Christian contact with Scandinavian. (To read about the history of Saint Nicolas and Santa Claus, see our previous article.) The first people in history, according to Bowler, to make the argument that Wotan/Odin was the original Santa Claus were the Nazis.

As Hitler led Germany into war in 1939, the Christian message — with all its ideas of “peace on earth” and “turning the other cheek” — didn’t mesh well with the Nazi vision, to say the least. It’s likely Hitler had to take into account that Germany has a long, rich history of Christianity (Heck, Martin Luther — who launched the Protestant Reformation — was German!) and everyday Germans loved Christmas.

Therefore, the solution was “to avoid any direct attack on the traditional Christmas but to use the state’s power, whenever possible, to promote a non-Christian view of the holiday.”

It makes sense that Hitler would try to suppress the holiday celebrating the birth of the one who taught, “Blessed are the merciful, for they shall receive mercy… Blessed are the peacemakers, for they shall be called sons of God” (Matt 5:7, 9) and “Love your enemies and pray for those who persecute you, so that you may be sons of your Father who is in heaven” (Matt 5:44-45).

Can anything be more oppositional to what Hitler was trying to accomplish?

But it must be noted that despite being surrounded by Nazi pressure, world warfare, and moral deterioration, evidence exists that the true nature of Christmas could not be removed and, thus, continued in the hearts of the German people. (For example, see below an image of the “Stalingrad Madonna,” drawn on the back of a map during the Battle of Stalingrad.)

Death could not suppress God’s Son. Is it any wonder Hitler failed as well?

Why is Christmas on December 25th?