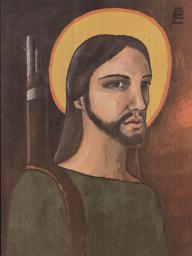 He said to them, “But now let the one who has a moneybag take it, and likewise a knapsack. And let the one who has no sword sell his cloak and buy one. 37 For I tell you that this Scripture must be fulfilled in me: ‘And he was numbered with the transgressors.’ For what is written about me has its fulfillment.” 38 And they said, “Look, Lord, here are two swords.” And he said to them, “It is enough.” (Luke 22:36-38)

(Picking up right where we left off in PART ONE…)

Similar to Matthew 10:34, when we look at the second “sword” passage in isolation it appears Jesus is in favor of using weapons. Yet, upon digging deeper, it appears highly unlikely. Luke’s Gospel includes the same peaceful teachings as we find in Matthew’s Gospel in the Sermon on the Mount, so what are we to make of Jesus telling his disciples to get swords?

As Luke’s Gospel draws near to the grand climax – Jesus’ arrest, crucifixion, and resurrection – Jesus addresses his disciples, making reference to when he sent them out earlier (the same event connected to the first sword passage in Matthew 10). He says to his disciples,

“When I sent you out with no moneybag or knapsack or sandals, did you lack anything?” They said, “Nothing.” He said to them, “But now let the one who has a moneybag take it, and likewise a knapsack. And let the one who has no sword sell his cloak and buy one. (Luke 22:35–36)

Then, Jesus makes reference to his impending execution, which fulfills scripture no less:

For I tell you that this Scripture must be fulfilled in me: ‘And he was numbered with the transgressors.’ For what is written about me has its fulfillment.” (Luke 22:37)

First, we have to once again take into account all of Jesus’ other teachings about loving enemies and turning cheeks. Nowhere do we see Jesus encourage any sort of armed uprising or violence towards anyone. Let’s also keep in mind, no writer of the New Testament nor did any of the early church fathers, all of whom were obviously closer to Jesus than we are, ever understood Jesus’ teachings as anything but nonviolent and aggressively peaceful.

Secondly, if Jesus were telling his disciples to buy swords for an armed revolt, would two swords be enough? Maybe if your “armed revolt” was robbing a first century 7-11. So, no, two swords are certainly not enough to take on the mighty Roman Empire.

But this verse has often been used in another way, one less fantastical than Reza Aslan’s creative writing project Zealot. Jesus isn’t telling the disciples to revolt (with – I just have to say it again – two swords), but he’s telling them to defend themselves. This passage is often used by Christians as evidence that Jesus was OK with using violence for self-defense.

This is much more plausible, but this still isn’t the main point Jesus is making here. Jesus’ enemies are about to make their big move; Jesus will soon be arrested and executed. Things are about to get intense. The followers of Jesus are about to enter into a new period of hardship and opposition. Could Jesus be telling them to get swords to defend themselves? It’s possible. But, on the other hand, if Jesus were telling them to get swords to defend themselves – once again – would only two swords be enough for twelve men?

Like in Matthew 10:34, it seems Jesus doesn’t expect to be taken completely literally. He’s communicating to his disciples that hardship and hostility are coming. But I don’t think his disciples get his point. Throughout the Gospels, Jesus’ disciples constantly misunderstand him, especially when it comes to his mission.

They know he’s the Messiah, and they’re expecting him to start a revolution and drive out the Romans, but Jesus keeps telling them: My mission is to die to fulfill scripture. And in this passage, the disciples totally overlook his reference to his coming death and instead zoom in on his mention of swords (not unlike us today). Even if Jesus is suggesting swords for self-defense, it’s not the thing he wants his disciples to focus on. (Moreover, even if Jesus is telling his disciples to get swords for self-defense, it certainly doesn’t suggest armed revolt.)

Jesus: Things are about to get intense; you may want to buy a sword. I’m about to be arrested and executed to fulfill scripture.

Disciples: Hey, we have two swords!

Jesus: That’s enough swords. Sounds like the twelve of you are ready for battle.

Jesus: Things are about to get intense; you may want to buy a sword. I’m about to be arrested and executed to fulfill scripture.

Disciples: Hey, we have two swords!

Jesus: Enough about swords. You’re still not getting it.

Written in a time where scholars clearly valued bluntness over tactfulness, John Calvin calls the disciples “stupid” for thinking Jesus was telling them to take up arms [1]. If you have any doubt about this nonviolent understanding of this passage, you only have to keep reading in Luke’s Gospel – and not even very far.

Only several verses later, Jesus is arrested on the Mount of Olives and his disciples literally ask him, “Lord, shall we strike with the sword?” Then, one of his disciples, Peter, cuts off the right ear of the high priest’s bondservant. Jesus’ response? “No more of this!” Matthew includes in his Gospel that Jesus tells Peter, “Put your sword back into its place.” Then, Jesus famously says, “For all who take the sword will perish by the sword” (Matthew 26:52).

No, I don’t think Jesus was the first century Jewish Che Guevara.

*This is an excerpt from my upcoming, vastly revised and expanded edition of Who Jesus Ain’t.

Read PART ONE: “I Have Not Come to Bring Peace, But a Sword!” Was Jesus an Armed Revolutionary? (Part 1 of 2)