THE SIGNIFICANCE OF THE WOMEN WITNESSES 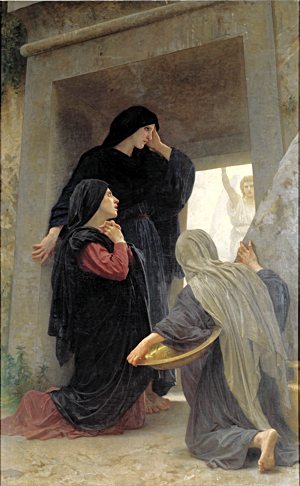 After Jesus’ arrest, Peter — one of Jesus closest disciples — denied association with Jesus three times and the rest of the remaining 12 “inner circle” disciples ran off, abandoning Jesus (Mark 14:50). Even if we were to take a skeptical stance when reading the Gospels, this doesn’t seem like an invented detail by the early church since it certainly doesn’t make the disciples look good; these same men would be leading the early church, especially Peter. It was the woman who stayed by Jesus to watch him die on the cross (along with John)(Matthew 27:55; Luke 23:49; John 19:25-27), and it was the women to first see him alive afterwards.

The New Testament Gospels report that at least five women, several who are named, including Mary Magdalene, were the first to find Jesus’ tomb empty, and Jesus’ first post-crucifixion appearances were to Mary Magdalene and (at least some of) these other women (Matthew 28:1-10; Mark 16:1-8; Luke 24:1-11; John 20:1-18). Considering that in first-century Israel women’s testimony wasn’t taken seriously, even in a court of law, this is an interesting detail.

The Talmud, a written commentary on the Jewish oral law, gives us insight into attitudes towards women in first-century Israel when it puts the testimony of women as witnesses on the same level as gamblers (dice-players and pigeon-racers, to be exact) and slaves [1]. A well-known morning prayer for Jewish men thanks God that “You have not made me a Gentile, a slave, or a woman.” With this, first-century Jewish historian Josephus writes:

“But let not a single witness be credited; but three, or two at the least; and those such whose testimony is confirmed by their good lives. But let not the testimony of women be admitted, on account of the levity and boldness of their sex.” (Antiquities of the Jews 4.8.15)

In fact, when the women share that they witnessed Jesus alive, the disciples don’t take them seriously (Luke 24:10-11) — yet another detail not likely to be invented; it certainly makes the future leaders of the church look clueless. Even 1 Corinthians 15:3-7, an important early confession of the church, mentions numerous eyewitnesses of the resurrection by name but leaves out naming any women. (We can assume the women were numbered with the 500 unnamed witnesses it mentions.)

So, the big question is: Why would all four Gospel writers claim that women were the first witnesses to the resurrection when no one in their culture would take the testimony of women seriously? Even in the second-century Greek philosopher Celsus mocked Christianity as a religion based on the testimony of Mary Magdalene, a “half-frantic woman.” [2]

Therefore, it seems unlikely the Gospel writers would invent this detail if they were only looking to convince people of Jesus’ resurrection. In fact, this detail points towards the opposite: The Gospel writers were more concerned with reporting what they believed to be true than creating a story of mass appeal.

The combination of the embarrassing details of Peter’s denial and the male disciples’ abandonment of Jesus; the absurdity of worshipping a crucified God-man to first-century Jews and Romans (which I wrote about before); and the first witnesses of the resurrection being women all are details very unlikely to be invented if the Gospels were mere fictions, especially if they were invented to win converts to a new religion.

THE CHALLENGE OF FOUR GOSPEL ACCOUNTS

As I pointed out before, when we read the retelling of the same event in more than one Gospel, sometimes they’re told differently and this often causes confusion. (Let me point out, this is often the case when reading four independent accounts of any incident.) For instance, the two birth narratives in Matthew and Luke share key details but are also extremely different, almost seeming like two different stories. But when we read them carefully, we can figure out how they fit together like pieces of a puzzle. Much of Matthew’s account — including the visit of the magi and the flight to Egypt — occur later than many of the events recorded in Luke’s account, perhaps months or even a year or two after Jesus’ birth.

When we read the accounts of the women finding the empty tomb and the events that immediately follow (including the resurrection appearances of Jesus) we run into the same challenge but worse. All four Gospels, at first glance, seem to have major differences!

Take some time to read the 4 Gospel accounts of the women and the empty tomb:

Next article, we’ll tackle how to understand these differences.

NEXT: Differences vs. Contradictions & the Gospels as Ancient Biographic Literature

[2] Quoted by Origen in Against Celsus.