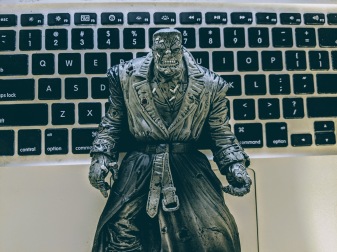 There are common logical mistakes people make when in debate  — whether politicians, journalists, or keyboard warriors — and these are called logical fallacies. If you’re truly hoping to have meaningful conversations, avoid these. (And, let’s be honest, people often make these “mistakes” on purpose!) Sadly, all of these have become so common in online interactions, people just accept them as the norm. By being aware of them, you can avoid making them yourself as well as be equipped to point out the faulty arguments of others.

The straw man fallacy is to give an inaccurate or ridiculous portrayal of an opponent’s argument so to easily dismantle it. The idea is to build a man of straw, so then it’s easy to knock him down.

For example, I once posted an article about how daughters who grow up with their biological fathers in their home are safer, less likely to get pregnant before marriage, and less likely to get into abusive relationships. A feminist, who took issue with the article (despite it being backed by data), summed up the article as, “All girls who grow up without a father will be raped.” Well, that’s not what the article said! And, so, I’m under no obligation to defend that view. As you can see in this example, often the straw man fallacy plays out as the person taking the stated view to an unreasonable extreme.

Another straw man I have often come across online is when atheists portray Christianity as “believing in an old, bearded man in the sky.” If that’s what they really think Christians believe, they have no grasp of the most basics of Christian theology. Even Christian children’s books I read to my kids don’t teach this idea of the God of the Bible. Now, if Christians did believe an old man in the sky — have at it, atheists! But Christians are not ancient pagans; Christians worship an immaterial, timeless, self-existent being who exists apart from the universe and brought all of creation into existence — the Uncaused First Cause, the Unmoved Mover. As you can see from this example, often those making the straw man argument are trying to make their opponent look foolish. In many cases like this, they’re just looking to mock someone, not have a reasonable discussion. So, don’t waste your time. Move on.

Represent your opponents’ opinions accurately and engage with that, not some caricature you created.

Ad hominem is Latin for “to the person.” This is to attack the person and not the argument.

This is the internet atheist who goes on and on about how dumb you are to be a Christian, yet he doesn’t give one relevant argument against Christianity or for atheism. This is the person who labels you as a bigot or hate-monger because you reasonably disagree with a lifestyle or behavior. This is the person that dismisses you by stereotyping you as a member of a group rather than addressing what you’re saying.

Let me point out something else: As a Christian, I have moral, logical, and practical reasons for being against hypocrisy, but even if a person is the biggest hypocrite in the world, it doesn’t necessarily mean their argument is invalid. For example, a person could give a perfectly valid argument for vegetarianism while eating a hamburger. Is the person a hypocrite? Yes. But that doesn’t mean the argument is any less valid.

A red herring is an attempt to distract from what is being debated by bringing up an unrelated — and usually emotionally loaded — topic. Apparently, the saying comes from when criminals would drag stinky fish across a trail to throw off the scent of the hound dogs hunting them.

Recently, my friend was leading a reading group on a Zoom meeting for our ministry at Rutgers, Ratio Christi. The topic of discussion was a book on scientific evidence for the existence of God. A husband of one of the women, an angry atheist that clearly didn’t like her participating in the group, jumped into the meeting and started ranting about Christians who believe humans and dinosaurs lived at the same time. He kept bringing up the young earth view of creation, but nothing in the book had anything to do with this. Furthermore, the young earth view isn’t an essential Christian belief. It was irrelevant to the conversation! He was just trying to derail the discussion. (There was a fair amount of Ad Hominem and Straw Man fallacies spewing from his mouth too.)

One of the clearest examples I’ve personally experienced with a red herring fallacy is when I posted an article I wrote about the eugenic origins and racist history of Planned Parenthood. Someone responded by bringing up how certain churches hold to a view that doesn’t allow women to be elders. What does that have to do with Planned Parenthood’s racist history?! This was so random it’s hard for me to imagine the thinking behind it, but it was clearly an attempt to distract from the real issue.

Similar to a red herring, this is an attempt to overwhelm an opponent with mountains of information and facts — but the problem is they’re irrelevant to the debate.

I’ve experienced this most often when a person responds in a LONG paragraph. My first reaction (before reading it) is to feel intimidated and think, “Man, this person must really know what they’re talking about!” But, once I read it with a critical eye, I realize that much of the paragraph is not about the specific topic being debated. Sure, the person is bringing up a lot of related stuff, but it’s not addressing the specific component of debate.

Recently, someone matter-of-factly mentioned racist doctrines in the modern church. I asked for examples. The person wrote a long paragraph giving examples of racism and even some places where modern Christians could do a better job addressing racism with solid theology, but none of this was racist doctrine that was held by any church. For the record, I’m not denying racism committed by self-proclaimed Christians either in the past or present, but I do deny there is any doctrine based on biblical grounds to justify this evil — though there have been attempts (and they all fail miserably under biblical scrutiny). My point is, I asked for examples of racist church doctrine and he provided a long paragraph on racism and the church, but he didn’t answer my request.

OK, there’s one last big one that needs to be addressed, but it’s such a big one, it needs it’s own article…