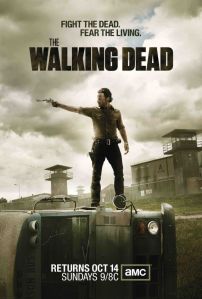 ***SPOILER ALERT: This article speaks of The Walking Dead primarily in general, but an event in Season 2 and the first episode of Season 5 are discussed.***

AMC’s zombie apocalypse TV show The Walking Dead, based on a comic book series of the same name, is not one of my all-time favorite shows, yet I find myself unable to stop watching.

I read the massive Compendium One collection of issues #1-48 of the comics before I knew the TV series was being planned, and I found much of the story-telling flat and didn’t feel compelled to continue reading the series. Though I do believe The Walking Dead makes a much better TV show than comic, the show has suffered spells plagued with lack of tension where you’re left wondering, How can a show about a zombie apocalypse grow stale?

All that being said, there’s something irresistible about a story continuing as a TV series long after the point where most zombie movies would’ve ended. Further, I’ve always found the post-apocalyptic genre fascinating since watching as a kid the post-nuclear holocaust movies of the 80’s, including films like The Road Warrior and Terminator. Throw in zombies on top of that, and how can I not watch?

Where I would not classify The Walking Dead in the same category as ground-breaking TV as far as story-telling, character development, or acting goes as The Sopranos or Breaking Bad, the creative forces behind The Walking Dead have created one of the most engrossing shows on television at this time, and they should be commemorated for putting together some truly gut-wrenching episodes. I mean, who can possibly forget in Season 2 when Carol’s lost daughter, Sophia, comes ambling out of Hershel’s barn with other zombies? 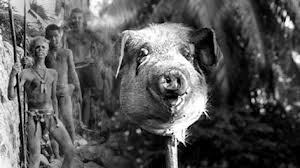 Whether it be William Golding’s classic novel Lord of the Flies, the more recent Denzel Washington post-apocalyptic movie Book of Eli, or the zombie world of The Walking Dead, we find similar themes in all of these stories where civilization breaks down. Evil is left unfettered. Anarchy reigns. Survival of the fittest is the only law. And we see the “good man” (and woman) swimming against the crashing waves of this new, harsh world, trying to maintain goodness – a sense of compassion, a sense of right, a sense of justice, even a sense of humanness – yet often being sucked down by the riptide and barely keeping his head above the waters.

This theme is seen throughout the four completed seasons of The Walking Dead as well as a theme so prevalent in the first episode of the 5th Season (titled “No Sanctuary”) that it’s nearly smashed into your face.

Season 4 ends with Rick Grimes and his grimy crew locked in a storage container in Terminus. In “No Sanctuary,” we see the true colors of the people at Terminus as they line bound men up on their knees, knock them senseless with a bat, cut their throats, and let them bleed out into a tub in a literal human slaughterhouse. As in movies like Book of Eli and The Road, cannibalism is often symbolic of the ultimate breakdown of humanity.

But the theme of “the good” fighting tooth-and-nail to not spiral down to “the evil” in this episode is mostly felt in the contrast between Rick Grimes’ clan and the Terminus clan through the opening and closing flashbacks of the episode. It’s revealed that Terminus had, in fact, been a true sanctuary for people at one time and the people there had been good, compassionate people. But then, another group attacked them. The people of Terminus were locked in the same storage containers they now trapped people in, and they were raped and brutalized. Somehow, they escaped, killed their captors, and decided they would never be victims again. Their new outlook is summed up in one telling line from the show:

“You’re the butcher, or you’re the cattle.”

Interestingly, in most post-apocalyptic stories, even in a world where zombies surround the characters, the real danger is humankind. The true threat isn’t simply a harsh environment. In the genre, the search for food or shelter eventually falls into the background. Humans adapt; they learn to survive, even when living among the mindless undead. But then the true threat becomes other humans. We see this clearly in the zombie film 28 Days Later as well as The Walking Dead. Once civilization collapses, evil can reign unrestrained. All of these sorts of stories speak of the darkness that comes out of the human heart. 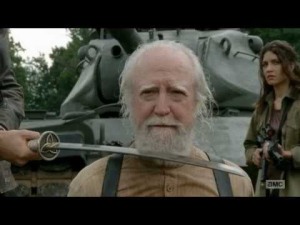 D.A. Carson in his book How Long, O Lord? states, “As a whole, the Scripture recognizes that civil authority restrains evil.” As he points out, the Book of Judges makes this resolutely clear. Anyone familiar with the pattern throughout Judges knows that the book is a continuous cycle that progressively spirals downwards into more and more chaos. The continuous refrain said throughout Judges also closes the book:

“In those days there was no king in Israel. Everyone did what was right in his own eyes.”

As Carson points out, “unless there is a responsible authority to curtail evil, individuals become more and more brazen in their greed, pillage, and violence.” It’s interesting how with a little tweaking, all of the above statements could be speaking about the world of The Walking Dead. 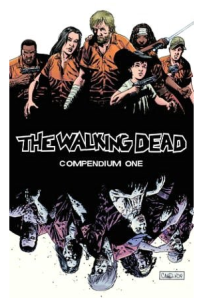 Earlier in the Bible, when we read the Old Testament laws given by God to the ancient Israelite nation, they may seem needlessly severe, even harsh, but one has to recognize it was a much harsher time. Much of the progress towards a more civil, humane society in the West is due to 2,000 years of Christianity. Though the Old Testament law seems harsh to us today, it must be understood in the context of the ancient Near Middle East. God’s law was set in place to minimize bloodshed by giving due process, for instance, before executing someone for a crime. Other examples are the “cities of refuge” established by God as safe havens to prevent unnecessary blood feuds between families and tribes.

As God’s progressive revelation through history continues on to the followers of Jesus, the most explicit biblical teaching about God ordaining government to restrain evil is found in Romans 13:1-5:

“Let every person be subject to the governing authorities. For there is no authority except from God, and those that exist have been instituted by God. Therefore whoever resists the authorities resists what God has appointed, and those who resist will incur judgment. For rulers are not a terror to good conduct, but to bad. Would you have no fear of the one who is in authority? Then do what is good, and you will receive his approval, for he is God’s servant for your good. But if you do wrong, be afraid, for he does not bear the sword in vain. For he is the servant of God, an avenger who carries out God’s wrath on the wrongdoer. Therefore one must be in subjection, not only to avoid God’s wrath but also for the sake of conscience.”

It must be noted that this by no means leads to the conclusion that all governments are good and just or even that a perfect government exists. The Bible is quite clear that all people are imperfect sinners, and, thus, all governments are likewise imperfect. D.A. Carson states, “Thus, while the Bible insists that both ideally and in practice the state retrains wickedness, it fully recognizes that the state may perpetrate it. That means that the state sometimes protects us from suffering, and sometimes causes it.”

Though there is much more that can be said about how Christians should respond to unjust governments, for our purposes here concerning The Walking Dead, we need not go further. Christians worship a God of order, not disorder, and without government – without structure in place to protect, police, and practice justice – evil spreads like a zombie-making plague. 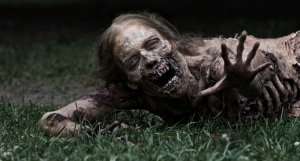