*Are there Undesigned Coincidences between the Gospels & ancient writings outside of the Bible? How can minor details in the Gospels show the reliability of the Gospels? Are you sexy enough to handle this?* 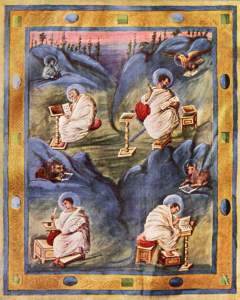 It’s highly unlikely that such complimentary minor details would be deliberately falsified, and the assurance that they’re based on authentic events is extremely high. In other words, when multiple people retell a true story, they may include minor details without an explanation of those details and others telling the same story may unintentionally fill in those missing pieces. Such non-deliberate cohesion smacks of authenticity.

Yes, by now you’ve probably figured out that I’ve been shamelessly placing “sexy” in every title of this series to catch people’s attention (with a healthy dose of irony). Here are more examples of Undesigned Coincidences:

Fixin’ to Fix Some Fish Nets

18 Now as Jesus was walking by the Sea of Galilee, He saw two brothers, Simon who was called Peter, and Andrew his brother, casting a net into the sea; for they were fishermen. 19 And He said to them, “Follow Me, and I will make you fishers of men.” 20 Immediately they left their nets and followed Him. 21 Going on from there He saw two other brothers, James the son of Zebedee, and John his brother, in the boat with Zebedee their father, mending their nets; and He called them. 22 Immediately they left the boat and their father, and followed Him. (Matthew 4:18-22)

OK, one big question immediately comes to mind when reading this passage: Why were these fishermen so quick to follow Jesus? I mean, would you give up your livelihood and abandon your family simply because some dude tells you to follow him?

Well, we find the answer not in Matthew, but in the much longer account in the Gospel of Luke:

5 Now it happened that while the crowd was pressing around Him and listening to the word of God, He was standing by the lake of Gennesaret; 2 and He saw two boats lying at the edge of the lake; but the fishermen had gotten out of them and were washing their nets. 3 And He got into one of the boats, which was Simon’s, and asked him to put out a little way from the land. And He sat down and began teaching the people from the boat.

4 When He had finished speaking, He said to Simon, “Put out into the deep water and let down your nets for a catch.” 5 Simon answered and said, “Master, we worked hard all night and caught nothing, but I will do as You say and let down the nets.” 6 When they had done this, they enclosed a great quantity of fish, and their nets began to break; 7 so they signaled to their partners in the other boat for them to come and help them. And they came and filled both of the boats, so that they began to sink.

8 But when Simon Peter saw that, he fell down at Jesus’ feet, saying, “Go away from me Lord, for I am a sinful man!” 9 For amazement had seized him and all his companions because of the catch of fish which they had taken; 10 and so also were James and John, sons of Zebedee, who were partners with Simon. And Jesus said to Simon, “Do not fear, from now on you will be catching men.” 11 When they had brought their boats to land, they left everything and followed Him. (Luke 5:1-11)

So, the reason the fishermen are so quick to follow Jesus in Matthew is because this is not the first time they’ve seen him! In fact, they’d witnessed Jesus teach and perform a miracle before he told them to follow him. No wonder they followed him so quickly in Matthew’s Gospel!

Where Matthew gives us more details of the actual moment of the calling of the fishermen, Luke gives a longer account (which includes the miracle before the calling) but then he simply summarizes or condenses – shortens or telescopes – the events after the miracle by simply telling us the fishermen left everything and followed Jesus. Where Matthew chose to emphasize the actual calling, Luke chose to emphasize the miracle. (Learn more about telescoping in another GFTM article.)

Only when we look at Matthew and Luke together can we conclude that some time had actually passed between the return to the shore after the miraculous catch and when the fishermen left with Jesus. How long exactly? We can’t say – but not a lot of time, because we’re told in Matthew’s Gospel that James and John were fixing the torn nets.

And, Yes! That is another Undesigned Coincidence between Luke’s and Matthew’s account of the calling of Peter and the other fishermen:

Matthew tells us in 4:21 that James and John, the sons of Zebedee, were “mending their nets.” Why? The detail is fleshed out in Luke. Luke 5:6 tells us during the miraculous catch, “… they enclosed a great quantity of fish, and their nets began to break.”

Perhaps the sons of Zebedee would’ve been more annoyed with Jesus for damaging their nets if he hadn’t done so by performing a miracle.

Up to this point in this series, we’ve been looking at examples of Internal Undesigned Coincidences — “internal” meaning within the Bible.

To end this series (for now), we’ll look at External Undesigned Coincidences — meaning collaborations between details in the Gospels with information outside of the Bible.

In the Gospel of Matthew, in the birth narrative of Jesus, Mary and Joseph, having been warned in a dream, flee with the newborn Jesus to Egypt from the wrath of Herod the Great. Then Matthew tells us this:

19 But when Herod died, behold, an angel of the Lord appeared in a dream to Joseph in Egypt, and said, 20 “Get up, take the Child and His mother, and go into the land of Israel; for those who sought the Child’s life are dead.” 21 So Joseph got up, took the Child and His mother, and came into the land of Israel. 22 But when he heard that Archelaus was reigning over Judea in place of his father Herod, he was afraid to go there. Then after being warned by God in a dream, he left for the regions of Galilee, 23 and came and lived in a city called Nazareth. This was to fulfill what was spoken through the prophets: “He shall be called a Nazarene.” (Matthew 2:19-23)

So, who is Archelaus? And why was Joseph so afraid of him? Matthew doesn’t give us one clue, nor does the rest of the Bible!

Due to growing tension between the Romans, the Jews, and the Jew’s Roman-appointed Herodian rulers (who were seen as half-breeds and traitors by the Jews), Josephus reports that Herod Archelaus slaughtered 3,000 Jews at the Temple during the Passover to quell a possible uprising.

So, why were Joseph and Mary afraid of Archelaus? Ancient historian Jospehus gives us the obvious answer in his work Antiquities of the Jews. Thus, Joseph and his family fled from Archelaus to Nazareth in Galilee, a place outside of the territory of Archelaus’s reign.

Likewise, many rulers (including kings, governors, etc.) mentioned in the New Testament are also mentioned by Josephus, including Pontius Pilate, Herod the Great, Herod Agrippa, and Antonius Felix. Josephus also wrote about John the Baptist, Jesus’ brother James, and Jesus himself. (Read this GFTM article to learn more about what Josephus said about Jesus.)

In fact, 84 facts in the last 16 chapters of the Book of Acts alone have been confirmed by historical and archaeological evidence outside of the Bible, and in the Gospel of Luke, 11 historically proven leaders appear in the first 3 chapters alone. New archeological discoveries have continually supported the reliability of the biblical record, including the discovery of Jacob’s Well, a building inscription of the name Pontius Pilate, and an ossuary containing the bones of Caiaphas, the high priest who helped orchestrate the crucifixion of Jesus.

Undesigned Coincidences in the Gospels: It Don’t Sound Sexy, But Oh Man It Is

More Undesigned Coincidences in the Gospels: Bringing Sexy Apologetics Back

Is the Bible Any More Accurate than Other Religious Texts?

Is There Evidence of Jesus’ Existence (Outside the Bible)?

Searching the Bible for Mother God: Examining the Teachings of the World Mission Society Church of God