**How can minor details in the Gospels show the reliability of the Gospels? Do multiple accounts confuse us or give us deeper insight? How sexy can apologetics be?** 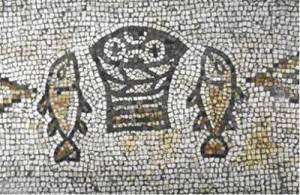 It’s highly unlikely that such complimentary minor details would be deliberately falsified, and the assurance that they’re based on authentic events is extremely high. In other words, when multiple people retell a true story, they may include details without an explanation of those details and others telling the same story may unintentionally fill in those missing pieces. Such non-deliberate cohesion smacks of authenticity. 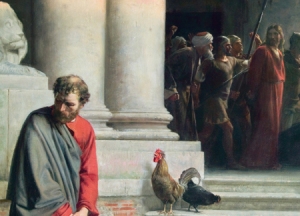 Peter, arguably Jesus’ most famous disciple, is not known for being perfect, but for being impulsive and brash. He’s also remembered for infamously denying three times that he knew Jesus Christ after Jesus’ arrest.

John is the only Gospel writer to give us an account of Peter being “reinstated” into Jesus’ flock of disciples after his resurrection, where Jesus asks Peter three times (mirroring Peter’s three denials) if he loves him, and then following with three commands for Peter.

During this event, Jesus says a little something that sounds a little odd:

14 This is now the third time that Jesus was manifested to the disciples, after He was raised from the dead.

Reading carefully through all of the Gospel of John, we find no answer! Sure, we can make some guesses about who or what “these” are, but how can we be certain?

But if we turn to the Gospels of Matthew and Mark, we find our answer. We find the answer during the Last Supper:

27 And Jesus said to them, “You will all fall away, for it is written, ‘I will strike the shepherd, and the sheep will be scattered.’ 28 But after I am raised up, I will go before you to Galilee.” 29 Peter said to him, “Even though they all fall away, I will not.” 30 And Jesus said to him, “Truly, I tell you, this very night, before the rooster crows twice, you will deny me three times.” 31 But he said emphatically, “If I must die with you, I will not deny you.” And they all said the same. (Mark 14:27-31)

We find the same statement in Matthew 26:33. Did you catch it?

In Mark: Peter said to him, “Even though they all fall away, I will not.”

In John: Jesus said to Simon Peter, “Simon, son of John, do you love Me more than these?

Peter had arrogantly boasted that even if the other disciples (“they”) fall away, he never would. Then, after Peter denied knowing Jesus three times, Jesus asks him, “Do you love Me more than these [other disciples]?”

Ouch. Praise God that he is a forgiving God. 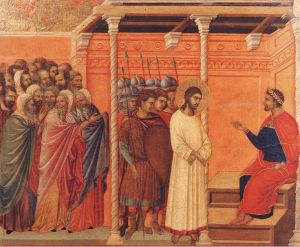 In Luke 23, we find Jesus before Pilate.

1 Then the whole company of them arose and brought him before Pilate. 2 And they began to accuse him, saying, “We found this man misleading our nation and forbidding us to give tribute to Caesar, and saying that he himself is Christ, a king.” 3 And Pilate asked him, “Are you the King of the Jews?” And he answered him, “You have said so.” 4 Then Pilate said to the chief priests and the crowds, “I find no guilt in this man.” (Luke 23:1-4)

This exchange between Pontius Pilate, Jesus, and the Jewish authorities is brief and a bit odd. The hostile Jews accuse Jesus of claiming to be a king, so Pilate straight up asks Jesus if he’s a king. Jesus says, “You have said so,” which sure sounds like Jesus is confirming that fact — or at least not denying it. But then Pilate turns to the Jews and says Jesus is not guilty. Huh? What just happened?

To find the answer, we have to go to John’s longer account of this event:

28 Then they led Jesus from the house of Caiaphas to the governor’s headquarters. It was early morning. They themselves did not enter the governor’s headquarters, so that they would not be defiled, but could eat the Passover. 29 So Pilate went outside to them and said, “What accusation do you bring against this man?” 30 They answered him, “If this man were not doing evil, we would not have delivered him over to you.” 31 Pilate said to them, “Take him yourselves and judge him by your own law.” The Jews said to him, “It is not lawful for us to put anyone to death.” 32 This was to fulfill the word that Jesus had spoken to show by what kind of death he was going to die.

33 So Pilate entered his headquarters again and called Jesus and said to him, “Are you the King of the Jews?” 34 Jesus answered, “Do you say this of your own accord, or did others say it to you about me?” 35 Pilate answered, “Am I a Jew? Your own nation and the chief priests have delivered you over to me. What have you done?” 36 Jesus answered, “My kingdom is not of this world. If my kingdom were of this world, my servants would have been fighting, that I might not be delivered over to the Jews. But my kingdom is not from the world.”

So, it’s not in Luke, but in John that we see the rest of the puzzle. It’s in John where Jesus says,

Thus, Pontius Pilate concludes Jesus is no threat – not in an armed revolutionary way anyway – or any way that the Romans need to be concerned about. Jesus admits he’s a king, but not one of this world, and his disciples have no intentions of fighting the Roman Empire.

It’s likely Pilate didn’t know what to make of Jesus – perhaps he only thought of him as a harmless religious nut – but he concludes that Jesus is not guilty of any crime against the Roman Empire. Thus, Pilate walks out and announces this to the hostile Jews.

What we have in Luke is what’s called telescoping, which is a compressed version of the telling of an event. In other words, Luke gives us the short version, leaving out many details. (See the GFTM series “The Joy and Angst of Four Gospels” to learned more about telescoping and other literary devices used in the Gospels.)

But, before we move on, go back and reread John’s longer account, because even John leaves out a detail! He does NOT record anything about the hostile Jews specifically telling Pilate that Jesus claimed to be a king! The Jews only accuse Jesus of “doing evil,” but when Pilate brings Jesus inside, the first thing he asks him is, “Are you the King of the Jews?”

What? Why? Where did he come up with that?

We must go back again to Luke’s shorter account to find that detail:

And they began to accuse him, saying, “We found this man misleading our nation and forbidding us to give tribute to Caesar, and saying that he himself is Christ, a king.” (Luke 23:2)

Ironically, Jesus was indeed a threat to the Roman Empire, just not in the way Pilate thought.

NEXT: More Sexiness & Undesigned Coincidences — including EXTERNAL ones! 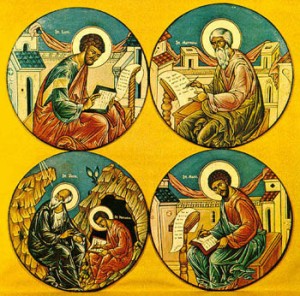 Searching the Bible for Mother God: Examining the Teachings of the World Mission Society Church of God

The Joy & Angst of Four Gospels

The Walking Dead & the Christian Worldview