Santa Claus is “the dominate fictional character in our world. Neither Micky Mouse nor Sherlock Holmes, Ronald McDonald nor Harry Potter wields a fraction of the influence that Santa does… His image is recognized and loved all around the planet,” Dr. Gerry Bowler, history professor at the University of Manitoba, writes in his book Santa Claus: A Biography.

In our last GFTM article, Keeping the Chaos in Christmas: Pagan or Christian Celebration? A Short History of the Battle Over December 25th, we looked at what Dr. Bowler documents so well in another one of his books, Christmas in the Crosshairs. As we saw, many of the modern debates about Christmas have been going on since the beginning, including whether the celebration of Christ’s birth has been too heavily influenced by pagan folk customs.

Of course, one can’t enter into these debates without the jolly fat man being considered either.

Where it’s difficult to trace when exactly and to what extent many of these pagan folk traditions entered the Christian celebration of Christmas, historic evidence shows us this happened after 300 AD over a period of centuries and varied from place to place as Christianity spread far and wide. (For more details, see the previous article.)

Gift-giving goes way back to the pagan festivals Christmas eventually replaced, and there is a “long association between Christmas and gift-giving” that was “long criticized by the church” for materialism and “lingering paganism.” But the popularity of these customs among the everyday people won out, and eventually the church Christianized them. Gift-giving for Christmas was linked by the church with charity to the poor and the bringing of gifts to the newborn Jesus.

Yet, the gift-giving Saint Nicholas didn’t appear until the 12th Century.

Traditions existed of gifts being delivered to children by various miraculous saints on the eves of their holy days: Saint Barbara, Saint Martin, Saint Lucia, the Wise Men, and others.

But Saint Nicholas, by far, was the most popular.

By 1,100 AD, Saint Nicholas’ popularity was rivaled only by the Virgin Mary. Saint Nicholas was “the most powerful male saint on the Church calendar: the patron of sailors, Vikings, Russians, Normans, barrel-makers, thieves, perfumers, picklers, florists, haberdashers, and many more – but especially of children.”

Little, if anything, can be said with any historical certainty about St. Nicholas. He was the bishop of Myra on the coast of modern Turkey in the early 4th Century. He allegedly died on December 6, 343 AD.

In the 12th Century, he was believed to be a magical deliverer of small gifts to kids on the eve of his day, December 6. Children prayed to him and left out their shoes to be filled with treats. But legend says he did much more than that.

He was a wonder worker of miracles; in fact, he was a darn super hero long before the first comic book was ever imagined. He rescued sailors, soldiers, children, starving people, and slaves.

He once saved three daughters from being sold into a life of prostitution by secretly delivering bags of gold to their poor father at night. Perhaps this has some truth to it as any non-super human could perform such a heroic act, but he also brought three murdered young men back from the dead after they were dismembered, shoved into barrels, and pickled! Apparently, he flew long before Superman entered the scene. He also was able to do what can only be called teleportation of both himself and others.

Clearly, he was a nurturing, passionate (super) man, but he was no wimp or pushover either. He often was portrayed as carrying a whip or rod. Children both loved and feared him. He expected children and others to keep up with their church lessons and to be moral.

My mother-in-law, who grew up in Germany, said when she was a child someone dressed as St. Nicholas visited their home. He asked her and her siblings if they had been behaving. Her father replied, “Not all of the time.” St. Nicholas then gave each of their hands a stern smack with his rod.

After the Protestant Reformation in 1517, the tradition of Saint Nicholas, along with devotion to other saints of the Catholic Church, came under fire and were banned in areas controlled by Protestants. In England, Elizabeth I in 1558 ended all Saint Nicholas related activities. In England and Scotland, gift-giving moved to New Year’s Day.

Saint Nicholas survived in eastern Europe, where the influence of the Reformation was weaker. He also survived in Holland, where there were both Catholic and Protestant areas. (It was the Dutch who would eventually bring Saint Nicolas to North America.)

Both German Catholics and Protestants replaced Saint Nicholas with a figure that was much more Bible-based: the Christ Child (das Christkindl). Thus, this moved the gift-giving from December 6 to Christmas Eve, December 24. (To read why Christmas is celebrated on December 25, see our previous article.)

But Baby Jesus just wasn’t menacing enough for parents. Parents wanted a figure that would instill some fear into their kids to help keep them in line. Saint Nicholas was benevolent but also a disciplinarian. After all, the dude carried a rod for beating children.

So, new figures started to appear who accompanied the Christ Child to substitute for Saint Nicolas’ rod. But these characters brought menacing to a whole new level! Many were downright horrifying: Aschenklaus (Nicholas in Ashes), Pelznickel or Belsnickel (Nicholas in Furs) and Ru-Klaus (Rough Nicholas), along with an “assortment of devils, witches with iron teeth, female disembowers, monstrous goats, or monks armed with switches” and Krampus, Hans Trapp, and Klabauf, who carried whips, chains, and sacks to steal away children.

Meanwhile, Catholics kids in southern Europe got the better end of the deal. They received gifts on Epiphany (January 6) from the Three Kings or the kindly good witch Befana or a “pooping log” (!?!).

It was not until the 1800s that our modern version of Santa Claus emerged.

In 1809, Washington Irving published a mock history called A History of New-York from the Beginning of the World to the End of the Dutch Dynasty. This satire introduced Saint Nicholas, who the Dutch loved and still celebrated on December 6. For those outside NY, this was the first time many heard of “any flying, supernatural, nocturnal Christmas Gift-Bringer.”

One year later in 1810, John Pintard, a prominent merchant and founder of the New-York Historical Society, gave out a picture of Saint Nicholas accompanied by a poem. St. Nick was pictured as a stern-looking man in a bishop’s robe with a rod and a halo over his head. (See below.)

More poems soon followed by others, one calling him “Sancte Claus.” In the next few years, variations of the Dutch name for Saint Nicolas, Sinterklaas, appeared in American print: Santa-claw, Santeclaus, Sandy Claw, Santiclaw, Sanctus Klaas. All were based on oral, folk traditions with slightly different takes on the gift-giving wonder worker.

In 1821, the first lithographed work in the U.S. was also the first to publish a picture of “Santeclaus.” It was titled The Children’s Friend, a poem complete with the essential modern staples for Santa Claus: gifts on Christmas Eve, a team of reindeer, snowy chimney tops. Bowler writes, “The Children’s Friend wrench[ed] Santa Clause out of his Dutch context and plac[ed] him in a winter setting appropriate to North America in December.”

A year later, Clement Clarke Moore wrote a series of poetry for his daughters and published them anonymously in the newspaper the following year, titled “Account of a Visit from St. Nicholas.” This would become the Christmas classic familiar to many today:

’Twas the night before Christmas, when all thro’ the house,
Not a creature was stirring, not even a mouse;
The stockings were hung by the chimney with care,
In hopes that St. Nicholas soon would be there…
When, what to my wondering eyes should appear,
But a miniature sleigh, and eight tiny rein-deer…
Down the chimney St. Nicholas came with a bound…
He had a broad face, and a little round belly
That shook when he laugh’d, like a bowl full of jelly…
But I heard him exclaim, ere he drove out of sight —
Happy Christmas to all, and to all a good night.

Moore ignited an explosion of interest in this Saint Nicolas. Writers and illustrators competed to add to the story. “For decades there was no one standard version of the nocturnal visitor nor even agreement as to his name,” Bowler writes.  Some names included Kriss Kringle, Belsnickel, or some variation of “Santa Claus.”

By 1850, his home was securely set in the Arctic where he lived with his minions, a horde of elves. In the 1860s, German American cartoonist Thomas Nast in Harper’s solidified what Santa looks like today.

In Europe, most continued to hold on to their own versions of a magical figure delivering Christmas goodies, but the harsher holdouts from the Middle Ages — Perchta the Disemboweler in central Europe; Père Fouettard and his whip in France; the demonic Krampus, who stole children in Austria; the cannibal giant Gryla in Iceland; the horrifying goat-beast Joulopukki of Scandinavia — were replaced by a considerably more kinder, gentler version of “Santa.” Father Christmas, Pere Noel, Bobbo Natale, Samiclaus, and others emerged. They all were variations of the Santa Claus theme, but all were big-hearted, grandfatherly gift-givers.

Bowler writes, “By midcentury the American Santa Claus was not only a fixture in the stories told in American homes, he was a positive boon to merchants.” Whatever else he was, this Christmas gift-bringer ended up being a business man’s dream. 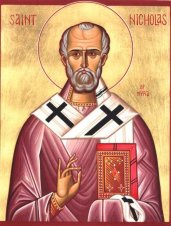