*Can atheists & Christians have civil discussions?  Is there some middle ground they can agree on?* 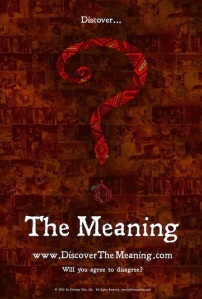 **My interview with Ian J. Keeney, director of the documentary The Meaning, where we discuss his film, how he became a Christian, and atheist/Christian relations **

A review on IMDb describes The Meaning as “a comprehensive study into the lives of people of various belief systems. The pacing of the film runs smoothly, considering the enormity of this project.  Name the last time you saw a film that had this much jam-packed into an hour and forty-five minutes.  In your travels, you come across motorcycle gangs turned “Holy Rollers”, surfers for Christ, rappers in the ‘hood talking about Jesus, university professors who believe God created Evolution, crazed Disney World naysayers, transgendered women, Catholic monks, animal rights activists, and former self-proclaimed “Vegan Satanists”—I mean, my God, Ian out did Geraldo on this one!”

The first time I learned of Ian J. Keeney it was memorable.  It was baptism day at our church, and several people I’ve never seen before were setting up professional movie cameras.  Was a celebrity getting baptized at our small, unassuming church?  Then Ian, who I had never met, stood up to be baptized, and while giving his testimony he tells the whole church that he used to be a “Satanist.”  Later, I would find out Ian worked in the film/TV industry and the people with the cameras were his friends.  I would also find out later that a Satanist isn’t the same as a Satan-worshipper.  Satanist was  a title some atheists who are extremely hostile towards Christianity give themselves.  Ian immediately went on my list of people I’d like to know.

Ian is the one person I know that can truly be labeled a Renaissance Man.  He writes movies, novels, poetry, and music.  Not only that, but he shoots and edits his own films, he records his own music, and he performs his poetry and music live.  You would think someone with this much creativity would be bursting with emotion and exuberance at all times, but Ian is laid-back and reserved – a guy anyone can sit down and have a decent talk with.  Even if the discussion goes into deep waters, Ian’s friendly demeanor and humor never waivers.

The following interview discusses his documentary The Meaning, Christian/atheist issues, and how he went from a Satanist to a Christian.

Steve: Tell us about your documentary, The Meaning.  What do you hope to accomplish with this film?

Ian: The Meaning is a film about the so-called “War on Religion” in the United States (or even, the world) and what that means for Christians and atheists particularly. What I hope to accomplish with this film is to open some hearts and minds for Christians and atheists to meet in the middle and discuss their concerns, rather than resorting to quips on billboards and bumper stickers.

Steve: It’s great that you worked with people of varying beliefs (and unbeliefs) about God on The Meaning.  It seems the project was a success, but was there any butting of heads on any aspect of the film?

Ian: There was not one time we ever clashed on set. Some of the most interesting conversations happened once the cameras stopped rolling. The whole tone of the movie is to be open, share ideas and never come to the conversation thinking, “I have to make this person believe my point of view.” When people are open to sharing ideas in a non-threatening manner without an agenda, there’s really no reason why there should be any butting of heads. It’s when the Christian starts trying to “sell” Jesus or the atheist tries to belittle your belief, that’s when things get ugly.

Steve: Did you purposely have atheists help make The Meaning to keep yourself honest — so you couldn’t be accused of editing the film in Christianity’s favor?

Ian: I would not have made this movie if I were not able to include people of varying beliefs because one of my main concerns is that this is never viewed as a film with an agenda slanted toward atheism or Christianity. It’s simply a platform for sharing ideas – something I don’t think Christians and atheists do often enough. If I’m saying atheists and Christians should be more open to discussions with each other for understanding, how could I say that if I didn’t invite others along for this discussion and give them an equal voice? 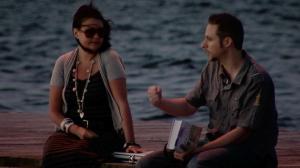 Steve: I know one of the big things you want to do is promote an open, honest dialogue between Christians and nonbelievers.  We both agree that people can disagree on “big” topics, but still remain friends and have discussions about things they disagree on without hard feelings and putting down each other.  But why do you think this is so hard for people to do?

Ian: I think there are several factors to this. For one, I think it’s human nature for people to always want to be right. It’s so hard for someone to admit that they’re wrong. Secondly, I believe there are a lot of misinformed people out there on both sides of the conversation just regurgitating something someone heard from someone else who heard something on TV. It’s important before we take a stance on anything that we have our facts straight and know the sources of those facts. Family Guy is not a reliable source.

There is also a conundrum with the fact that the Bible says to go in all the world and preach the gospel. The problem with that is, a lot of people don’t want to hear the gospel. Imagine you’re sitting peacefully at home having your coffee and cereal watching Joel Osteen on TV when there comes a knock on your door. It’s an atheist. He has a booklet and pamphlets to tell you why there is no God. Jesus is a lie and you need to just let it go. You’d probably be irritated by this unannounced guest just as much as most atheists would feel when someone comes like a door-to-door salesman but instead of selling vacuum cleaners, he’s selling Jesus. I think it’s important to try to put ourselves in each others shoes. We can’t communicate with someone we don’t understand.

Steve: Good points.  I’d just like to add no one should watch Joel Osteen.  I’m saying that in a joking manner, but I’m serious.

Steve: Talk a little about The Meaning’s Facebook page and the interactions on there.

Ian: We have a Facebook page for the movie and I use that as a way to keep this conversation going. I want this to be more than just a movie. If I’m trying to open a dialogue between Christians and atheists, I can’t just show a movie in a dark quiet theater and then say, “Thanks for coming. Now go home.” Whenever possible, we interact with our audience personally after the film and hold a Q&A. I don’t want it to stop there. You can continue to interact with us through Facebook and others who are there to discuss what’s going on in the world today. I try to keep things light and humorous sometimes too because I find value in laughter. These topics can be difficult enough, so a little comic relief is needed.

Steve: I’ve had some really great discussions on the Facebook page with people on both sides of the fence of belief and recommend people visit it.  Unfortunately, the disconnected nature of the internet — the lack of personal, face-to-face connection — sometimes makes people defensive and even rude, and I know this is what you don’t want to promote, Ian.

This may sound funny, but I would recommend people to jump into conversations on your Facebook page because it’s a great way to discipline ourselves in interacting with people of differing views.  It’s a great way to practice having an honest conversation and not a debate where you’re just trying to one-up the other guy.  It’s a great place to practice being fair-minded and to practice disagreeing with someone with grace and patience, especially if the other person does get rude.  If nothing else, since it takes place in “internet-time,” it teaches you not to respond immediately with your gut or emotion.  If someone writes something you disagree with and you feel yourself getting heated, don’t write back right away.  Take some time to calm down and think clearly, and then think out a rational, fair response.  If you care about the subject, it’s a challenge not to get emotionally involved — trust me — but it’s a great exercise in self-discipline.

Tell us about your radio show/podcast.

Ian: The radio show is an extension of The Meaning as well (BlogTalkRadio.com/DiscoverTheMeaning). We have several episodes up now and we have more scheduled for release very soon. On the show I talk with people in depth. You get a half hour long interview with all types of different people from theologians to atheists, musicians to poets.

NEXT: (PART 2) We’ll get into DEEP waters with Ian J. Keeney about how he went from a Satanist to a Christian, about atheist/Christian issues, and more about his documentary The Meaning.)

For info on the upcoming showings of The Meaning, including one in Paterson, NJ click here.

Making an independent film and getting it in front of audiences takes a lot of $$$.  Find out about The Meaning‘s fundraising campaign by clicking here.